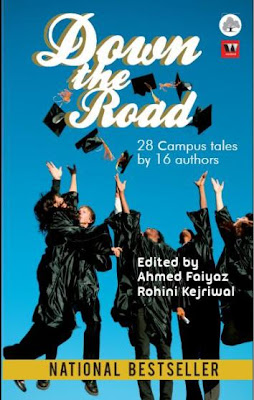 Down the Road, Edited by Ahmed Faiyaz with Rohini Kejriwal.

I recall an advertisement by Maggi sauces, which had the tag line: It's different I would apply the same tag line to this book.

This book is good for a quick light read, while caught up in Mumbai's traffic or when travelling by the local train. It will take you back to your college campus, that is for sure. At a special offer price on most portals of around Rs. 150 bucks, you may say: paisa vasool. Greyoaks's website (i.e: the publisher's website) has helpfully provided links of where you can buy the book online at special rates.

The cover says it all: 28 campus tales by 16 authors. Indian publishing has sprouted new shoots and how! There are many more new voices that can be heard, each of which provide a different perspective and a different flavour, the short stories contained in this book amplify this emerging trend in Indian publishing.

The sheer diversity of topics dealt with in this book make for an interesting read. It is not just about a boy-meets-girl story, so typical of many stories set in campus settings, even though a few stories in this book do relate to relationships, heartbreaks and even happy endings. The book also deals with issues that are so important to collegians, such as trying to fit in, dealing with student politics, campus placements...Stories of reunions, of meeting former colleagues are also captured in this book and some of them have an interesting twist.

Sahil Khan in his 'Foreword' has wisely mentioned that: The transition from school to college would have been a cultural shock for many, mostly because we would have moved away from the closed environments of our homes for the first time. Our experiences from school and back home were the factors affecting our choices unconsciously. And it is those choices that made us who we are today -- in how we choose our friends, our career path, our life partner.

The short stories in this book are classified into five sections.

The first section ' Attendance is compulsory', largely deals with the first few steps in a new environment, the first crush, the first dose of ragging.

The second section 'Festivals, Elections and Placements' consists of campus stories once the settling in stage has been dealt with. This is followed by the next two sections, viz: 'Lights Out' and 'Looking Back'. The books ends with the last section 'Essays' that encapsulate how books and movies have captured campus life over time.

An interesting aspect is that even the same issue is dealt with so differently in various short stories. Let us take the instance of reunions or meeting up with former classmates. 'Down the Road' by Ahmed Faiyaz, promises hope of getting back together and beginning life anew. Kanika and Tubby, will meet once again, after many many years at the snack bar where they had first met.

Pingy and his American wife play host to a stranded classmate. They do have a nice time re-living old memories, when once, the only conversation, if any, between them was just a hi and a bye. 'Strangers in strange places' by Abhijit Bhaduri made for interesting reading.

On the issue of reunions, my favourite story was 'Remember Me?' by Ahmed Faiyaz. The former cricket and football team member, now a podgy vice president at a bank, is devastated that a girl who had a crush on him, no longer remembers him. Is this true? I will not spill the beans, but leave you to find out. I chuckled out loud on reading this story.

'Sororicide' by Paritosh Uttam is a gem of a story. It shows why the 'Skipper' was propelled to behave in a certain manner towards a new timid teacher, even as his heart was crying out in sympathy towards her. It was all about not wanting to lose his title, he did not want Junior to be the class leader. Human nature is truly complex. Another story which brought this out and also brought tears to my eyes was 'Learning and Unlearning' by Rohini Kejriwal. I thought this would be a light cheery read, as it began with a Maggi Noodle feast (now everyone who has been to boarding school or a hostel has indulged in such a feast, with Maggi being cooked from water from the geyser or solar heaters!). Yet, it was heart wrenching to learn that the 'tough' girl in the class had built a wall around herself as she could not bring herself to trust anyone, having being molested by her Uncle. Sneh Thakur's story aptly titled 'Fresher' was a refreshing read, quite different from the routine tales on ragging.

I just enrolled as a member of BlogAdda and was delighted to get this book for review. I enjoyed reading it.


This review is a part of the Book Reviews Program at BlogAdda.com. Participate now to get free books!
Posted by Lubna at 10:11 AM

While I never did have the full college experience - attending a two year local college while living at home - College is a unique experience. Quite unlike grammar and High Schools. I would imagine that most of the stories would cross cultural lines too. I like your line of not wanting to be a frog at the bottom of a well...Frogs can be quite lucky though :) Peace. ~J 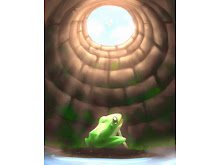